Multi-drug resistant bacteria in street foods. Should this concern us?

The streets of Kuala Lumpur are one of the finest locations for visitors who want to get a sense of what Malaysian culture is like to do so. This is particularly with the night markets, a vibrant and popular place to visit where various kinds of stuff are sold, including household things, clothes, and toys, but the main attraction is the food items. The cuisines sold here are vastly delicious, inexpensive, served with plenty of choices, and the foods can be consumed on the go (ready-to-eat foods) as we enjoy the walk under the canopy of stars. As such, it not only attracts the local crowds but also has become a melting pot for many tourists, foodies, and junkies.

However, few elements in night markets have brought serious concern to food safety officers and scientists who work on food security, safety, and sustainability. Night markets are usually operated as early as 2 pm and closes at 10 pm. The food items sold here are therefore, mostly cooked in advance (4 - 8h before the actual sale) and displayed in open space without being covered. This exposes the foods to parasites and worms, invisible germs, flies, insect and rodent droppings, human and animal hair, and skin flakes. On top of that, foods displayed at ambient temperature for an extended time are subjected to improper holding temperature and time. Malaysia is located at the equatorial geolocation; the climate is hot and humid throughout the year is seen as a perfect condition for the growth of microbes. Thus, microbes, especially foodborne pathogens, can easily contaminate the foods being sold in the night markets.

In addition to that, the dynamism of night markets has seen mainstream stalls such as egg, raw chicken, butchery stalls, etc., located adjacent to food items can easily cause cross-contamination and spread bacteria to cooked foods. Table I shows the incidence of foodborne illness and death annually worldwide. Notably, bacteria is the leading cause of foodborne morbidity and mortality.

On the other hand, Malaysians, in general, were reported lacking awareness towards food safety, and street foods were shown of being vulnerable to foodborne pathogen contaminations. Hence, to protect street food consumers from being exposed to the danger of foodborne pathogens, a nationwide alert to study the risk level and microbiological quality of street foods is obligatory.

At Manipal International University, Ts Pratheep Sandrasaigaran leading the task with the help of his final year students, who were assisting him in assessing the risk of Salmonella bacteria in night markets and street stalls. The team found that the bacteria isolated from street foods were unaffected when treated with commonly prescribed clinical antibiotics (the antibiotics that are usually prescribed to patients). This may pose a severe threat to public health as humans infected with Salmonella bacteria (found in street foods) may not be treated with antibiotics. Consequently, this may result in a major problem if foodborne disease outbreak happens, as seen in Kuala Terengganu night market and ‘Me kutu’ street food which has caused hundreds of victims to be hospitalized and few deaths due to Salmonella infection. Their findings were presented in the Asian Federation of Biotechnology Malaysian Chapter International Symposium 2021, held on 22nd and 23rd September 2021 (https://afobmcis.my/e-proceeding-afobmcis-2021/: page 57).

The team is currently working on policies on the sale of street foods and looking to develop necessary interventions to minimize the spread of foodborne bacteria in street foods and humans in future.

Table I: Foodborne pathogens and chemicals, its morbidity and mortality 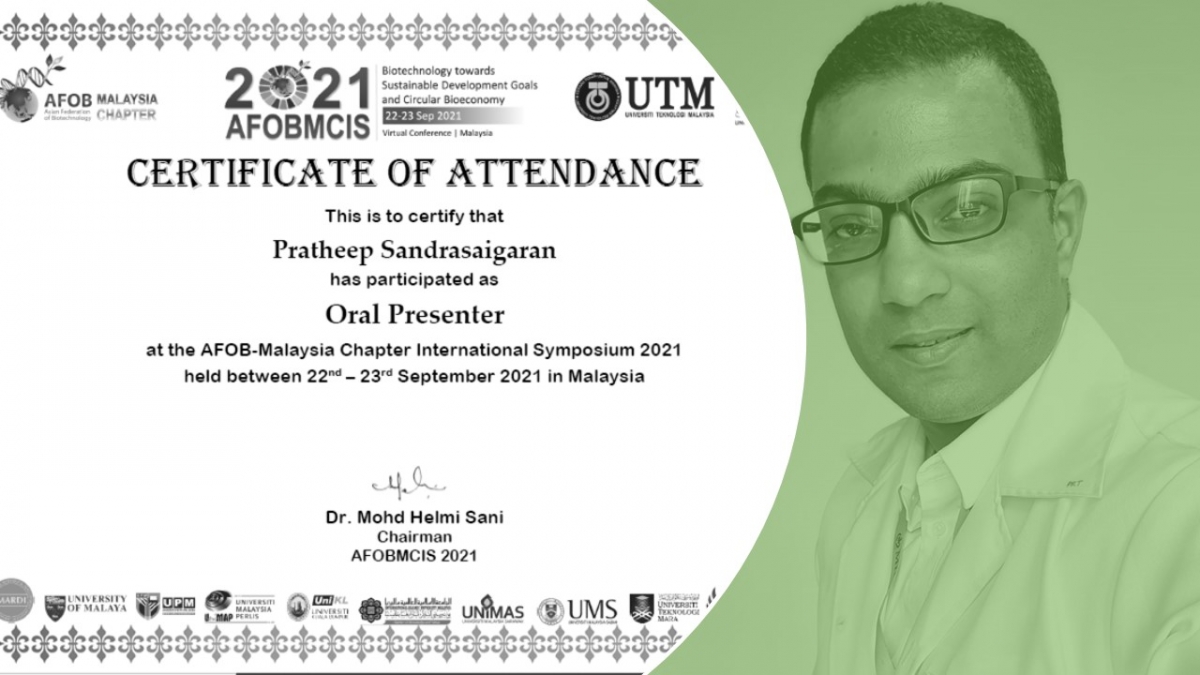 ANTIOXIDANTS : Reduce Risk of Many Disease

SUSTAINABILITY OF PRODUCT THROUGH DESIGN STRATEGIES

The versatility of single-stranded DNA By: Dr.

ANTIOXIDANTS : Reduce Risk of Many Disease